A PhD student at Ben-Gurion University of the Negev in southern Israel is using mushrooms to develop sustainable insulation for the construction industry.

Achiya Livne presented her mycoblocs at the 50th conference of the Israeli Society for Ecology and Environmental Sciences in Tel Aviv on Wednesday.

Buildings are responsible for around 40% of all energy use and carbon dioxide emissions in the industrialized world, Livne told confab.

More than 33 billion tonnes of concrete are produced each year, worldwide, with cement – a key ingredient – responsible for around eight to nine percent of global warming carbon emissions.

Livne set out to find a building material that could absorb, rather than emit, CO₂, landing on mycelium – fungal filaments that can be easily grown and are remarkably strong.

The mushrooms we see above ground are the fruiting bodies.

Beneath the soil are extensive networks of mycelium, which break down soil organic matter.

Insulation material for the construction industry made from fungal yarn and rapeseed straw by Achiya Livne, PhD student at Ben-Gurion University of the Negev. (Sue Surkes/Times of Israel)

Mycelium forms physical connections between plants in a complex system known as the Wood Wide Web.

Threads can extend a plant’s root reach to water and nutrients up to 100 times, according to English biologist Merlin Sheldrake “Entangled Life: How Fungi Make Our Worlds, Change Our Minds & Shape Our Futures.”

Livne has created a prototype that uses mycelium to bind agricultural waste – in this case rapeseed straw, although vine or date palm prunings can also be used. 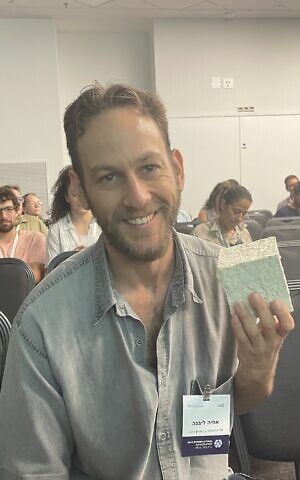 Achiya Livne, a PhD student at Ben Gurion University, with one of her mycoblocs, at the annual conference of the Israeli Society for Ecology and Environmental Sciences, in Tel Aviv, July 7, 2022. (Sue Surkes /Times of Israel)

The mycelium grows by feeding on organic matter. After a few weeks they are sufficiently developed to be heated, after which they die. The result is a fire-resistant block, stronger than polystyrene and with a negative carbon footprint.

The CO₂ emitted while the mushrooms are alive and breathing is less than the CO₂ absorbed by agricultural waste when they were still alive. Plants extract carbon dioxide from the air to use in photosynthesis.

Livne is now trying to find a way to reduce or eliminate the need to heat the mycelium.

Fine fungal threads – called hyphae – are used in a growing number of applications around the world, from building materials and textiles to meat substitutes, leather and plastic.

In the United States, a company called Ecological design manufactures packaging materials and other products from fungal hyphae.

Another company, Mogubased in Italy, uses the mycelium to make acoustic panels.

Material from Portobello mushrooms could one day replace graphite in lithium batteries, Sheldrake says, while mycelium from other species may already be used by doctors as an effective skin substitute.

Supporting The Times of Israel is not a transaction for an online service, like subscribing to Netflix. The ToI Community is for people like you who care about a common good: to ensure that balanced and responsible coverage of Israel continues to be freely available to millions of people around the world.

Of course, we’ll remove all ads from your page and you’ll have access to great community-only content. But your support gives you something deeper than that: the pride of joining something that really matters.

Join the Times of Israel community

You are a dedicated reader

We’re really glad you read X Articles from The Times of Israel over the past month.

That’s why we started The Times of Israel ten years ago – to provide discerning readers like you with must-read coverage of Israel and the Jewish world.

So now we have a request. Unlike other media, we don’t have a paywall in place. But since the journalism we do is expensive, we invite readers to whom The Times of Israel has become important to help support our work by joining The Times of Israel community.

For just $6 a month, you can help support our quality journalism while benefiting from The Times of Israel WITHOUT ADVERTISINGas well as access Exclusive content only available to members of the Times of Israel community.

Thanks,
David Horovitz, founding editor of The Times of Israel