US President Joe Biden reacts during a meeting on ‘Build Back Better World (B3W)’, as part of the Global Leaders Summit of the COP26 United Nations Climate Change Conference in Glasgow, Scotland, on 2 November 2021. Photo: AFP

The United States has plans for its first infrastructure projects in January under a Group of Seven (G7) initiative introduced to counter China’s proposed Belt and Road Initiative (BRI). , media reported on Monday, in a feeble attempt to get validation from Washington. existence post-COVID-19.

The US-led G7 initiative known as Build Back Better World (B3W), essentially a political stunt to challenge the eight-year-old BRI framework and a sneaky trick played by the Biden administration to Building momentum for passage of the US domestic infrastructure spending package is not financially feasible, experts said.

They cast doubts on the viability of the colossal expenditure needed to realize the B3W initiative fueled by ulterior motives, especially in relation to the open and inclusive BRI.

The United States is considering investments in five to 10 major infrastructure projects around the world in January, Reuters reported on Monday, citing an unnamed senior US official.

At least 10 promising projects in Senegal and Ghana were identified during a tour last week by a US delegation led by Daleep Singh, Biden’s deputy national security adviser, according to the report.

During a similar tour in early October, a US delegation visited Ecuador, Panama and Colombia, the official said, revealing that another tour of Asia is planned before the end of the year.

The infrastructure projects suggested by the US delegation actually have almost nothing to do with real “infrastructure,” a Senegalese government source told the Global Times on Tuesday via email.

It is still unclear how much will be needed for initial projects under the B3W initiative.

Launched in June as a broader G7 program, the B3W initiative aims to reduce the $40 trillion in infrastructure needed in the developing world by 2035. 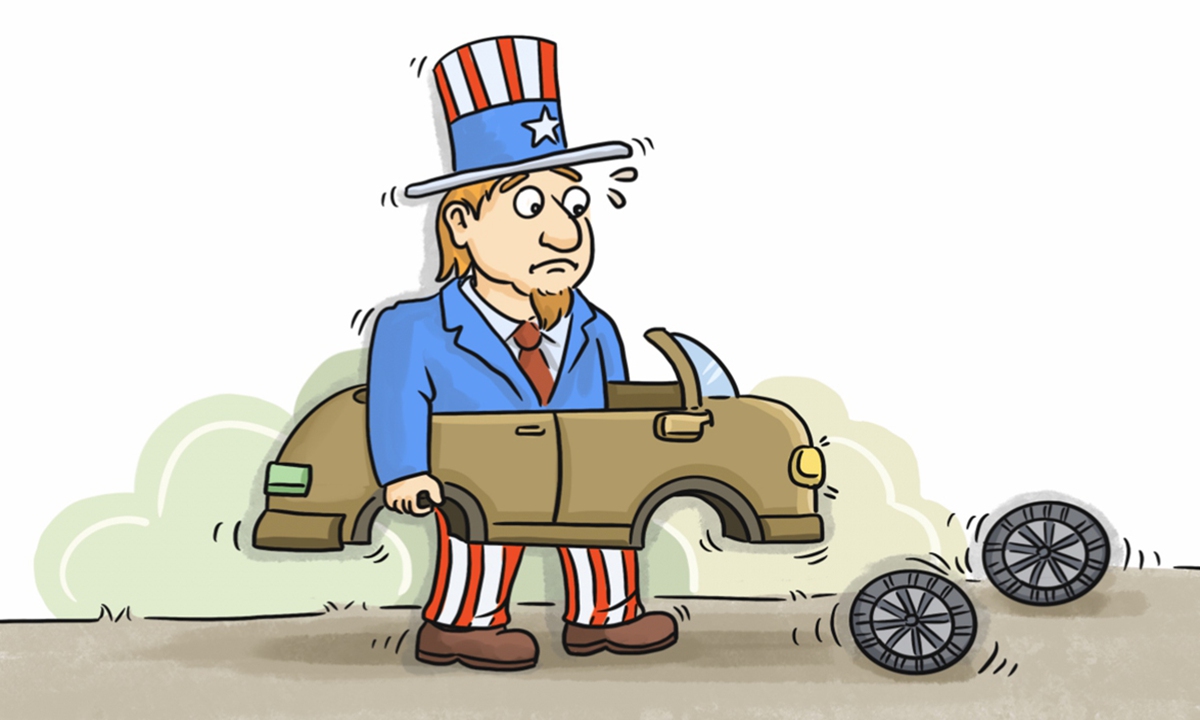 Financial overspending The plan goes well beyond the financing capabilities of initiators who have been struggling with their domestic infrastructure spending bills, notably the United States, as their economies, backed by significant quantitative easing programs, are beginning to scale back the pandemic-era stimulus, experts have said, revealing the devious unspoken intentions behind the B3W initiative.

The deal that presents itself as a better alternative to the BRI almost means a doomed road for B3W members, Gao Lingyun, an expert at the Chinese Academy of Social Sciences in Beijing, told the Global Times on Tuesday.

In geographic terms, the initiative will span from Latin America and the Caribbean to Africa and the Indo-Pacific, according to the release.

In light of all the turmoil the Biden administration went through to get a $1.2 trillion bipartisan infrastructure bill phased in over eight years, which only passed the House that on Friday after months of thorny negotiations, spending more than $40 trillion, arguably largely on the United States, initially seemed impossible.

A successful global infrastructure building plan needs at least three elements – sustained and massive funding, unwavering resolve and the spirit of inclusiveness and mutual respect among partners, and domestic political certainty, Lü Xiang, a researcher at the Chinese Academy of Social Sciences in Beijing, told the Global Times on Tuesday. “America doesn’t have one, and the only thing they’re good at is telling a good story by talking big.”

The Biden administration cannot even achieve the goal of renewing its national infrastructure and has a big funding problem. “How could he convince Congress to support a $40 trillion global infrastructure plan? And once the Republicans return to the White House and take control of the Senate and the House in the future, how could he promise his partners that the massive plan would be maintained?” Lu said.

The loosely planned initiative that comes eight years after the BRI’s original proposal but apparently exceeds in terms of funding is seen as political propaganda to compete with the BRI, according to Gao.

The B3W initiative was launched when the Biden administration fought an uphill battle on its own turf to pass the infrastructure package, hinting that the initiative serves as an effective tailwind for the package to eventually pass, a he added. He also said the US government plans to have more companies glued to the grand initiative, paving the way for its rivalry with China in the global infrastructure push in the post-virus era.

On the part of China’s proposed BRI which has retained openness, inclusiveness and transparency and which over the years has materialized impressively in the BRI markets, the initiative led by the United States is of little concern, observers said.

In response to a question about the U.S.-led plan, China’s Foreign Ministry said on Tuesday that the space for cooperation in global infrastructure construction is wide and not issue of competition between different initiatives.

Foreign Ministry spokesperson Wang Wenbin said the world should “build bridges” rather than “destroy bridges; strengthen connectivity rather than seek decoupling; make mutual benefits and win-win cooperation rather than a closed cooperation”. – door policy and exclusivity.”

“We hope the United States will take concrete measures to promote the joint development of all countries.”

Wang Yiwei, director of the Institute of International Affairs at Renmin University of China, told the Global Times on Tuesday that “there is no need to worry, and China welcomes all countries, including the United States, to make things credible, inclusive and sustainable”. actions to help the developing world.

The United States and Western countries have emphasized what is called “high standards or high quality”, which is what the BRI has always insisted on, “so we welcome their initiative on this But the fact is that high standards should adapt to the reality and conditions of developing countries, and this is China’s advantage,” said Wang Yiwei.

The reason the BRI is so successful is that China used its experience of reform and opening up, which perfectly combined high Western standards and China’s national conditions as a developing country, to serve projects in other developing countries, noted Wang Yiwei.

“Thus, without China’s cooperation, the US plan is unlikely to succeed,” Wang Yiwei said.

“It’s obvious that Biden is busy with various ‘mess-ups’ and losing focus on the really important issues. He chooses senseless fights with countries like China and Russia, while the American people look to a capable president. who can effectively solve the problems of the economy, the COVID-19 pandemic and immigration,” Lü said, noting that this puts Democrats and Biden in serious trouble in the upcoming midterm elections and even of the 2024 presidential election.

With the 2022 midterm elections a year away, “58% of Americans say President Joe Biden hasn’t given enough attention to the nation’s most important issues because a majority disapproves of his handling his job as president,” according to a new CNN poll.

Based on the current facts of US politics and the capability of the US-led G7 bloc, “We know that they (the US and its Western allies) are just talking big and we know that “They want to compete with us, but we still welcome them to help the world with us for better development. High-quality development, infrastructure and interconnection are necessary for mankind,” said Wang Yiwei.