A firefighter will check a small amount of smoke emanating from the building.

An early Wednesday morning fire engulfed the east end of the Guyana Stores Universal building, and firefighters are being hailed for their work in containing the blaze despite strong winds and combustible materials.

Fire Chief Gregory Wickham said after firefighters received a call around 1:29 a.m., they responded and doused the flames with water and broke down grilles and doors to enter the building. He said investigators have not yet determined the cause of the fire, but upon entering, firefighters reported seeing multiple pockets of fire on the first and second floors.

“The first tender came in and the ranks reported that they had seen several fires so they went into operation immediately,” he said.

The fire chief said the operation suffered a setback “for a little while” because of the grate and metal doors securing the store.

Five tenders responded to the fire call and, according to Mr Wickham, firefighters did an “excellent job” of containing the blaze and preventing it from spreading to other parts of the building. “..the hard work of the firefighters because we were able to break some windows in order to fight the fire while at the same time we were trying to enter the building proper to fight the fire,” said Mr. Wickham. 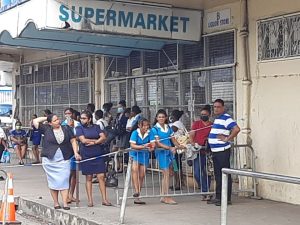 Guyana Stores employees outside the supermarket.

The police were also praised for their assistance with traffic and access control.

Stocks of clothing and household appliances were seen through the shattered windows.

Guyana Stores employees arrived at work but the doors of the supermarket, clothing and furniture departments remained closed. “This is where we get our daily bread from,” one employee remarked as she and her colleagues stood at the barrier outside the supermarket.

Meanwhile, poor drainage on Main Street caused the roadway to flood, and the courts had to install a makeshift bridge for customers and employees to enter.

Formerly Bookers Stores, the company was taken over by the government in the 1970s at the height of Guyana’s socialist experiment. When Guyana returned to a market economy in the late 1980s and 1990s at the end of the Cold War, the business was transferred to a local private sector group.