The pound may be on the verge of rallying against the US dollar if the Federal Reserve eases market expectations. Indeed, after the announcement, the price of the GBP/USD currency pair recovered to the level of 1.2204, a rebound from the recent collapse, which shifted its impact to the support level of 1, 1933, its low for a few years and is settling around 1.2170 at the time of writing the analysis. Investors are counting on today’s announcement from the Bank of England to look for catalysts for the pound in the forex market.

The Fed raised interest rates by 75 basis points, but according to analysts at Western Union Business Solutions, expectations for the size of Fed hikes after June are starting to look excessive. While money markets are showing virtual certainty that 75 points of gains will be realized, “it should be noted that given the current aggressive market prices, there is a risk that the Fed will not be able to deliver on its expected hawkishness. “.

If the market revises its expectations of how big the interest rate hike will be, by lowering the final expected interest rate (essentially the maximum rate expected in 2023), the dollar could give up some of its recent gains. . Some analysts say this could allow GBP/USD to extend its so far lukewarm recovery from 28-month lows.

Overall, the GBP/USD exchange rate is still stuck in a specific downtrend and any big bounces may be short-lived as the trend continues. According to some experts, “the pound is healing its wounds after falling to its lowest level in 13 months against the euro and its lowest level in 28 months against the US dollar. There are still many headwinds, such as higher inflation in the UK, weaker economic growth expectations relative to its major peers, slowing price expectations, as well as a strong injection of heightened political anxiety.

FX analysts point to a number of headwinds the pound is facing, including continued tensions between the European Union and the United Kingdom over the Northern Ireland protocol and the unveiling of a new Scottish Independence by Nicola Sturgeon.

The biggest risk event for the British currency in the near term comes in the form of the Bank of England meeting on Thursday as it considers the next move on interest rates. Markets are currently expecting a 25bp hike, but see strong potential for a significant 50bp hike given the Fed’s aggressive stance and the UK’s continued fight against a inflation of 9.0% in April.

While a more decisive rally of 50 basis points could improve investor sentiment towards the pound, it is likely to remain disappointing. According to some currency analysts, “The last time GBP/USD fell below $1.20, the currency pair slipped as low as $1.14 (albeit for a short time). All eyes are on the weekly close to provide the next trend signal, but given the recent drop in the GBP, selling cannot rule out a rally in the future. The meetings of the Fed and the Bank of England will play a vital role in determining the course of the dollar sterling.

According to the technical analysis of the pair: The reaction to today’s Bank of England announcement, along with the results of US economic data and the trajectory of global equity markets, will have a strong and direct reaction to the performance of the GBP/USD pair. Control of the strongest bears, and according to the performance on the daily chart below, stability below 1.2155 support will support the strongest bearish move below 1.2000 psychological support, and will complete the path of recovery. ‘collapse.

On the upside, it will be important to break the resistance levels of 1.2330 and 1.2500 for the first exit from the current downtrend. 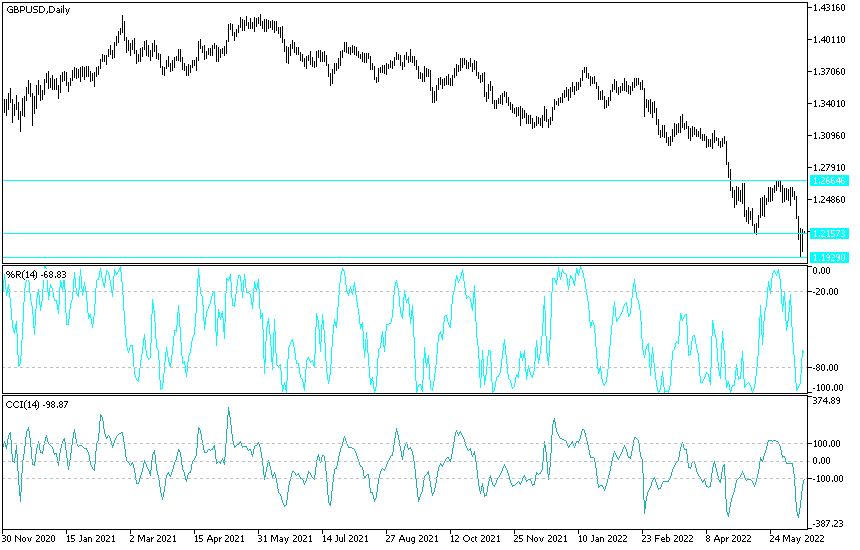