The pound rose against most major currencies after former Prime Minister Boris Johnson pulled out of the premiership race, leaving former Chancellor Rishi Sunak on his way to coronation.

The pound rose against most major currencies after former Prime Minister Boris Johnson pulled out of the premiership race, leaving former Chancellor Rishi Sunak on his way to coronation. However, the pound’s early gains quickly faded after new Prime Minister Rishi Sunak warned of tough times ahead for the economy and tough budget decisions in a speech to parliament. This all follows S&P Global PMI surveys indicating that the UK’s manufacturing and services sectors slipped deeper into recession in October.

It was just the latest in a growing list of indicators that the economy is slowing faster than expected by the Bank of England and other forecasters for the last quarter. This could signal the start of a slowdown which, according to recent forecasts by the Bank of England, could last up to five quarters.

But any slowdown could worsen in the coming months if the new government led by Prime Minister Sunak makes widely expected public spending cuts as part of the upcoming effort to balance the national accounts. A more economic approach to national finances has been taken, which is one reason why his election will have important implications for the economic outlook in the months and quarters to come.

“Rishi Sunak will take the keys to 10 Downing Street today. He spoke of the “profound” challenges facing the UK economy, following comments from Chancellor Jeremy Hunt that “impressive” spending decisions need to be made. Sunak was voted on a budget rectitude card. this may be good for gold, but less beneficial for the pound,” said ING Group analyst Chris Turner, “Obviously October 31 will be another massive day for UK financial markets as Sunak/Hunt offers its financial solution. But with dollar support like we do, we suspect GBP/USD needs to trade above 1.15 and maintain targets below 1.10 later in the year EUR/GBP to keep up with the range of 0.8650 to 0.8800 for now,” he added.

For his part, Andrew Goodwin, UK Chief Economist at Oxford Economics, said: “We believe Rishi Sunak as Prime Minister offers benefits to the UK economic outlook. But this combination of fiscal and monetary policy set to tighten in a possible recession means that a return to economic orthodoxy carries its own risks.

So far, GBP/USD is trying to maintain recent rebound gains, and breaking the overall downtrend should test the resistance levels of 1.1550 and 1.1700, respectively. On the other hand, depending on the performance on the daily chart, it will be important to break the support level of 1.1290 for the bears to dominate again. I always prefer to sell sterling dollars on all bullish levels. 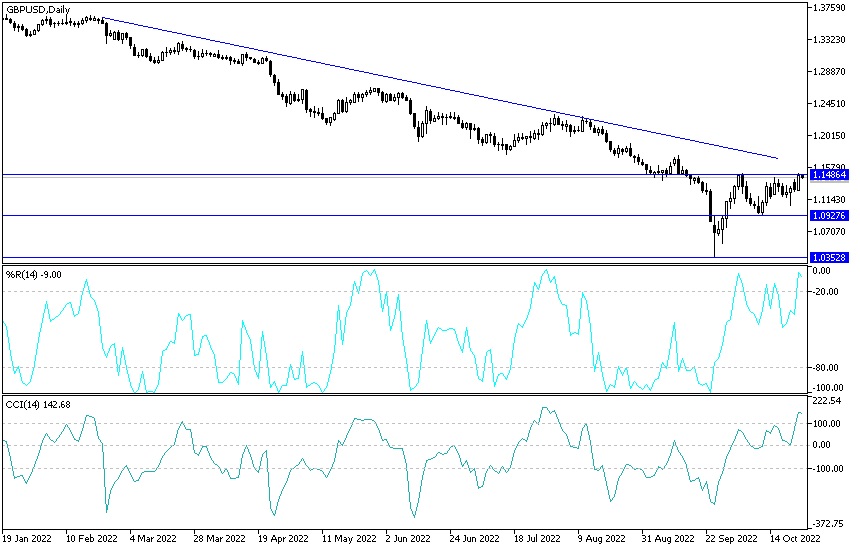 Ready to trade our Forex technical analysis? Here are the best Forex brokers to choose from.