Heatherwick has designed a 21m tall tree sculpture which will be erected outside Buckingham Palace in June for the Queen’s Platinum Jubilee celebrations.

The ‘tree of trees’ will house 350 native British trees in a spiraling steel and timber frame, with each tree planted in an aluminum pot engraved with the Queen’s cipher.

The sculpture has been backed by financial media giant Bloomberg and was designed to promote the Queen’s Green Canopy, a project to inspire a wave of tree planting across the UK.

Following the four-day Jubilee weekend from June 2-5, the trees will be donated to selected community groups and organizations to celebrate their work and “inspire the next generation of tree planters across the country,” it said. Heatherwick.

The trees will be stored over the summer before the start of the new planting season in October, with details on the beneficiary selection process to be announced soon. 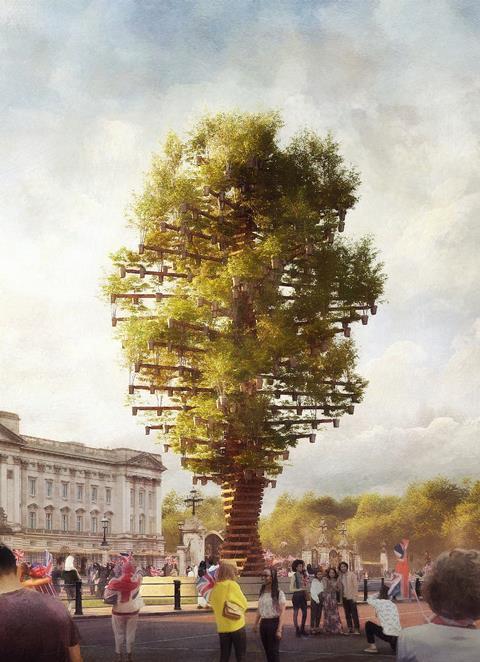 The practice’s founder, Thomas Heatherwick, said designing the sculpture had been an “honor”.

“The structure…comes together from workshops and nurseries across the country in an incredible community campaign that is literally changing the landscape of our nation,” he added.

The frame of the sculpture will be made from reclaimed and new steel with materials and skills sourced from UK suppliers.

Over one million trees have been planted so far through the Queen’s Green Canopy initiative, which focuses on increasing greenery and canopy cover in disadvantaged areas.

The project will also dedicate a network of 70 ancient forests across the UK and identify 70 ancient trees to celebrate the Queen’s 70 years on the throne, during which she planted more than 1,500 trees worldwide.