A former minister who played a key role in Australia’s controversial policy of ‘turning back’ asylum seekers has been hired to shake up UK border measures.

Priti Patel will today announce that Alexander Downer, former Foreign Secretary Down Under, will carry out a thorough review of the UK Border Force.

Its mandate will include examining the influence of trade unions on the effectiveness of the agency.

It comes after the union which represents the majority of Border Force personnel teamed up with a migrant charity to launch legal action against Miss Patel’s plans to send the Channel boats back to France.

Priti Patel (pictured) will today announce that Alexander Downer, former Foreign Secretary Down Under, will carry out a thorough review of the UK Border Force

It is understood that Mr Downer will cover all Border Force work – including immigration checks at ports and airports, anti-smuggling operations as well as the processing of asylum claims.

His report will be due in a few months and should influence ministers’ decisions on the next steps in immigration reform. This opens up the possibility of a complete Border Force overhaul.

The proposals could include a merger with an agency separate from the Home Office – Immigration Enforcement – which deals with foreign criminals, visa breakers and organized crime gangs.

The Home Secretary’s appointment of Mr Downer will be controversial as he has been a key supporter of Australia’s long-standing policy of blocking asylum seekers’ boats off its coast .

Introduced in 2001, it sees boats from Indonesia and other Pacific islands stopped at sea, refueled and redirected away from Australian shores.

Last September Mr Downer, writing in the Daily Mail, said: ‘Priti Patel has been widely ridiculed on both sides of the Channel for suggesting that boats carrying migrants should be physically ‘pushed’ back to the French coast. 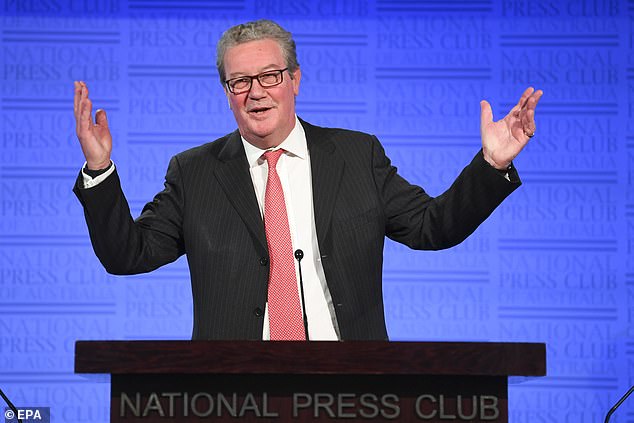 Mr Downer (pictured), who played a key role in Australia’s controversial policy of ‘turning back’ asylum seekers, will examine the influence of trade unions on the agency’s effectiveness

“Yet, from my experience as a former Australian foreign minister, I know that a ‘push-back’ policy can work.”

He explained how Australia took ‘direct action’ during its own migrant crisis, intercepting ships and deploying naval forces to turn them back.

“As news spread across Indonesia that we were determined to stamp out the traffic, it quickly stemmed the numbers,” he wrote.

“I see no reason why it can’t be done in the English Channel.

“My advice to Miss Patel would be to introduce the policy of ‘refoulement’ without fanfare and to keep the French informed only when necessary.”

Australia has pursued its rollback policy for most of the past two decades.

Originally called Pacific Solution, it was scrapped by the country’s Labor government in 2008 but later reintroduced after a series of migrant boat disasters.

Since 2013, it has been codenamed Operation Sovereign Borders. 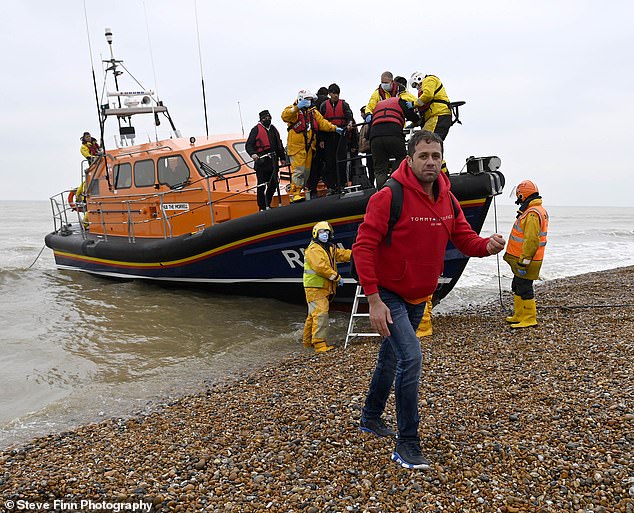 His report will be expected in a few months and should influence ministers’ decisions on immigration reform. Pictured: Migrants disembark from an RNLI lifeboat in Dungeness, Kent, last year

Mr Downer, 70, served as the Liberal Party’s foreign secretary – the Australian equivalent of the foreign minister – under Australian Prime Minister John Howard from 1996 to 2007.

Concern over union opposition to Miss Patel’s immigration plans came to a head last month when the Public and Commercial Services Union (PCS) teamed up with migrant charity Care4Calais to launch judicial review of his Channel removal proposals.

The PCS described the powers, which are currently going through parliament, as “morally reprehensible”.

Its secretary general, Mark Serwotka, said at the time that his organization “strongly opposes this policy, for moral and humanitarian reasons, and we do not rule out industrial action to prevent it from being carried out”. .

The legal challenge has not yet been heard. Last year, more than 28,300 migrants reached Britain from northern France, triple the 2020 total.