Analysis of the British pound (GBP)

The ECB’s version of the Fed’s Jackson Hole Economic Symposium took place last week, seeing a number of influential central bankers make an appearance. Jerome Powell stole the show when it comes to the markets by opening the door for rate hikes through 2023, keeping rate hike expectations high and fueling demand for USD.

Turning to the Bank of England (BoE), Governor Andrew Bailey reiterated his concerns about slowing growth alongside an expected rise in inflation. Bailey warned that the Bank would act more forcefully if inflation persisted. The depreciation of the pound compounds the current pressure on the cost of living in the UK for imported goods.

Drivers of sterling appreciation are few and far between, meaning any upward movement in GBP/USD is likely to emanate from a retracement in the USD. Such a scenario could play out this week as we start the third quarter after any rebalancing of the first half and second quarter – which tends to see an appreciation of the dollar. Resistance appears at 1.2250 and 1.2400.

The weekly chart highlights the importance of the 1.2000 level, which has only seen two previous significant breaks – one in 2016 during the flash crash and another in 2020 when the coronavirus spread. So it would seem that a sustained move below 1.2000 would require some kind of catalyst, so the threat of a potential recession should not be taken lightly.

In the absence of a catalyst, GBP/USD appears to have bottomed around 1.2000. Selling rallies always seems like a constructive prospect. 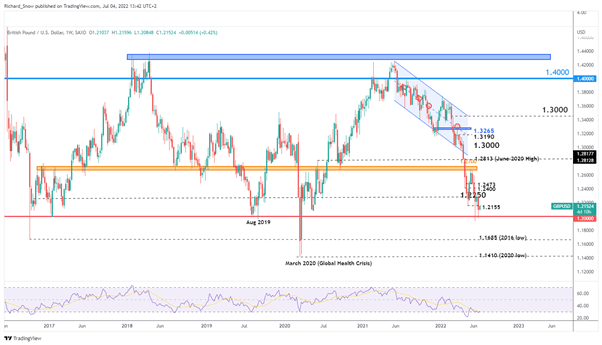 The majority of high-profile scheduled risk events emanate from the United States, with the FOMC minutes, services PMI and NFP being the main data set to be released. A negative surprise in the jobs data could put GBP/USD on a temporary reprieve, but such an impression remains to be seen.

Additionally, there are a whole host of central bankers this week to watch:

— Written by Richard Snow for DailyFX.com