The Extinction Rebellion activist suspected of laying eggs at King Charles launched a GoFundMe page last night in a bid to raise £10,000 for his ‘legal costs’.

Patrick Thelwell, 23, managed to raise £178 from his target after receiving donations from 18 people – before the page was taken down this morning.

It comes as he was arrested after allegedly skinning at least four eggs on Charles and Camilla, the Queen Consort, during a public walk in York on Wednesday.

In the appeal, titled ‘Fundraising for Patrick’s legal fees’, the University of York Masters in International Relations student claimed he faced a fine of £5,000 and up to six months from prison.

Thelwell brazenly plugged the page into his private Instagram account alongside a photo of him holding an egg while beaming. He told his followers he had received death threats despite admitting to performing the stunt.

Thelwell said he acted “in solidarity with all people in the world sick of living in a society that punishes the weak and poor and rewards the rich and cruel”.

He added: “If you would like to contribute to my legal costs, there is a link in my bio. Any support would be greatly appreciated.

“I am currently looking at a potential fine of £5,000 plus costs and up to six months in prison…Solidarity with you all!”

Thelwell says he has been banned from carrying eggs in public or coming within 500 yards of the monarch.

Patrick Thelwell, 23, raised £178 from his target after receiving donations from 18 people – before the page was taken down this morning. He plugged the page into his private Instagram account alongside a picture of him with an egg (pictured) 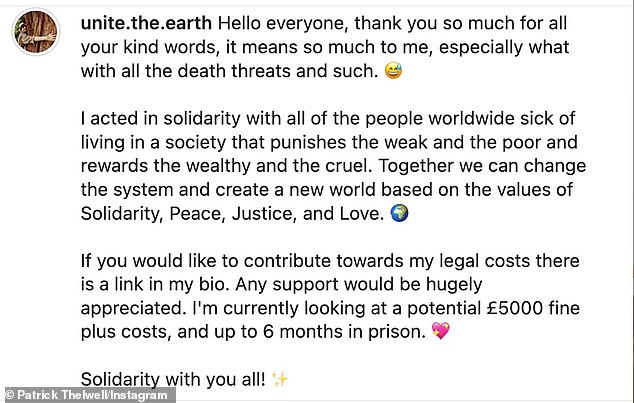 Thelwell said he acted “in solidarity with all people in the world sick of living in a society that punishes the weak and poor and rewards the rich and cruel”. 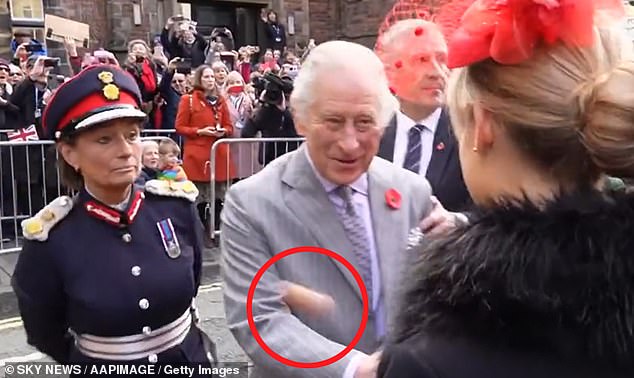 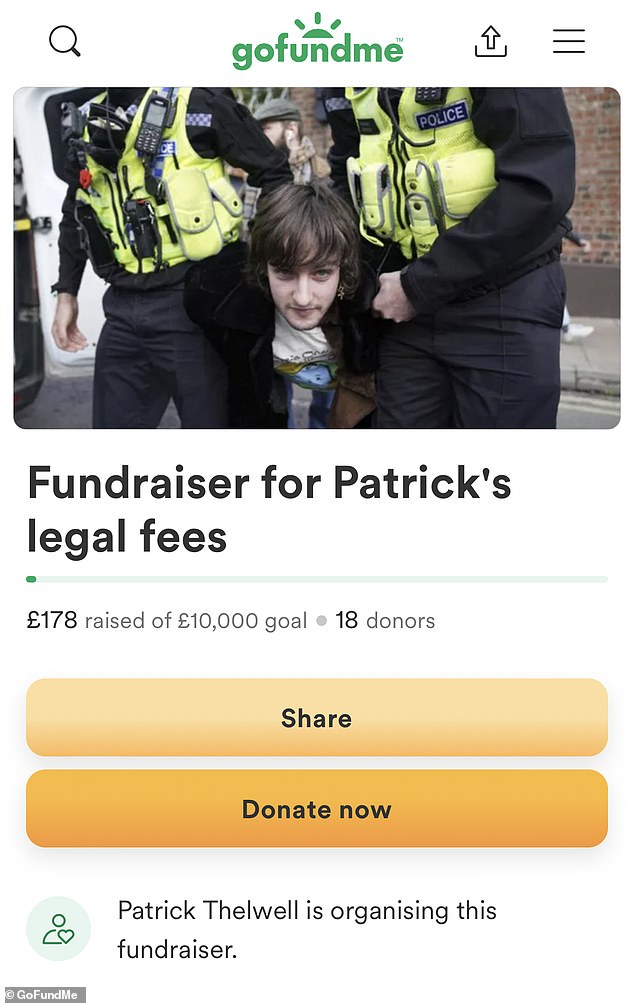 In the appeal, titled ‘Fundraising for Patrick’s legal fees’, the University of York Masters in International Relations student claimed he faced a fine of £5,000 and up to six months in prison.

The eggs missed the couple and Thelwell was tackled to the ground by police as onlookers shouted “God save the King” and “hip, hip, hooray”.

Yesterday Thelwell claimed the crowd had ‘lost their minds’ after the incident and were ‘spitting’ and ‘tearing my hair out’.

He claimed the “fascists” were “screaming and moaning in pure rage”, but said he was unperturbed because: “This is not my first rodeo”.

“After being arrested, the experience of this crowd, literally screaming and moaning in pure rage,” he told the Mirror.

“To say that my head should be on a spike, that I should be murdered on the spot. It doesn’t phase me because I understand what fascism is, what it looks like.

Thelwell claimed to have received a wave of abusive messages on social media, including death threats.

He said his bail conditions included staying at least 500 meters from the king and not being allowed to possess eggs in a public place. 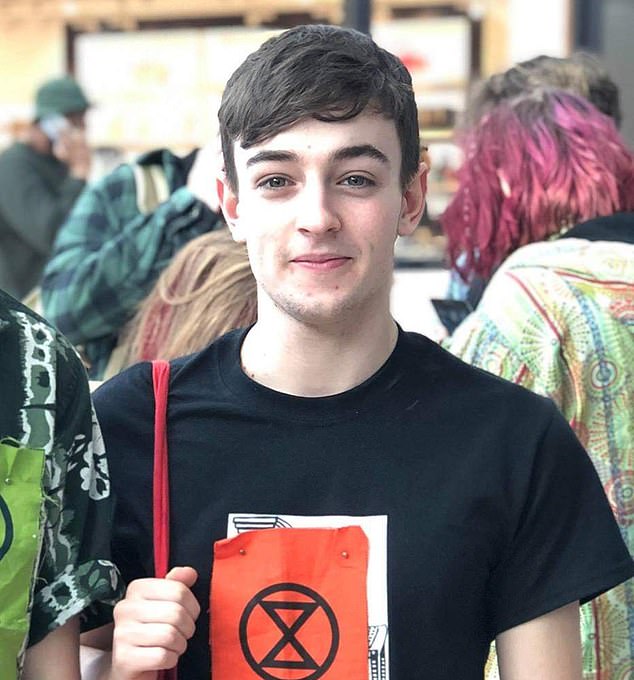 Patrick Thelwell, 23, skinned at least four eggs on Charles and Camilla, the Queen Consort, on a public walk in York yesterday 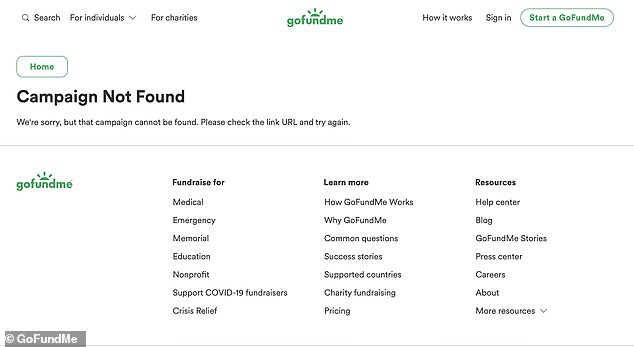 The GoFundMe page was deleted this morning 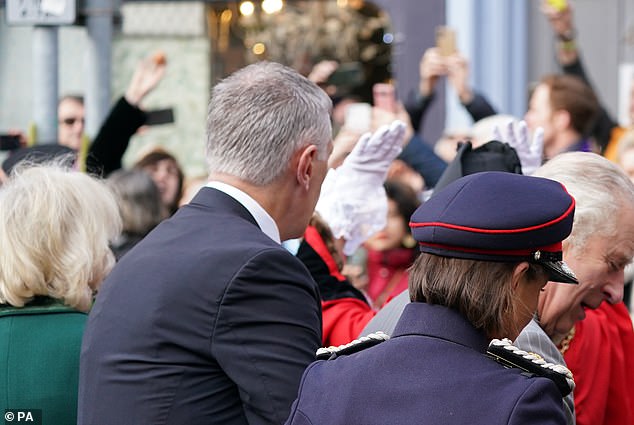 He said that condition was eventually changed so he could shop.

The student said he had been charged with a public order offense under Article 4 and was due in court on December 1.

Thelwell has previously described his arrest for disturbing the peace as “the most rewarding and worthwhile experience of my life”.

He has also previously expressed republican sentiments, tweeting that he “wouldn’t bow to the new false king” when the queen died.

In an online biography, the former York University society president recounts his involvement in left-wing politics.

Thelwell stood as the Green Party candidate in the 2019 local election for the Hull Road area of ​​York, which is now Labour-controlled.

His policy proposals included creating “an economy based on helping each other, sustainability and growing our own food” and pushing York Council to reduce its carbon emissions. 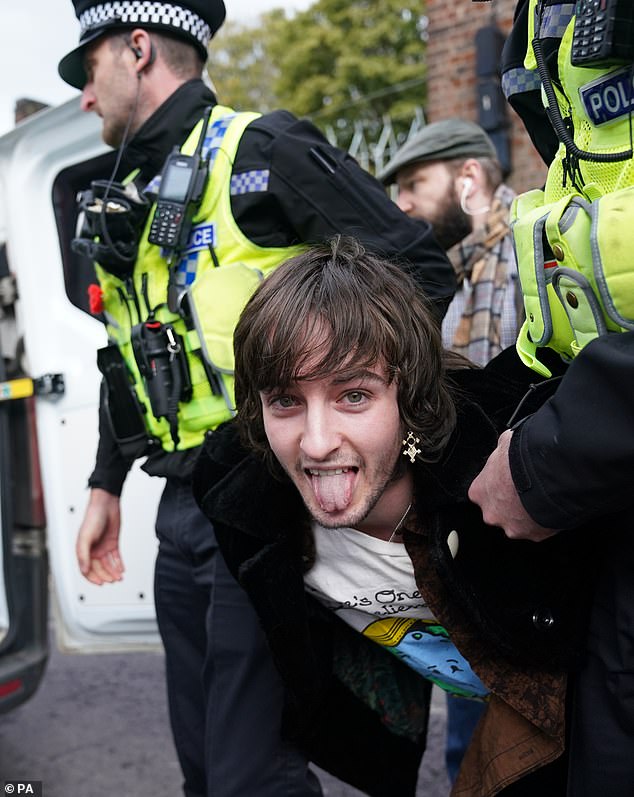 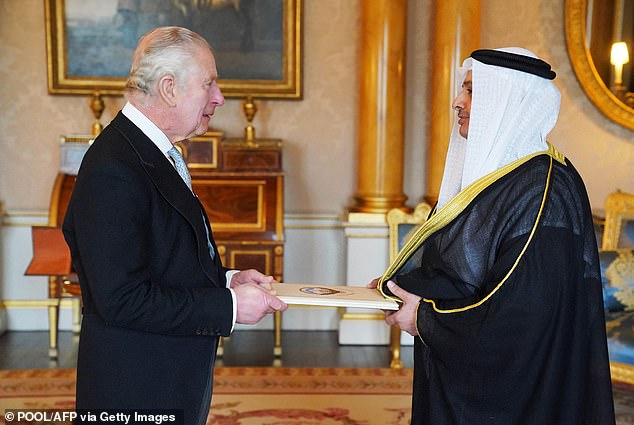 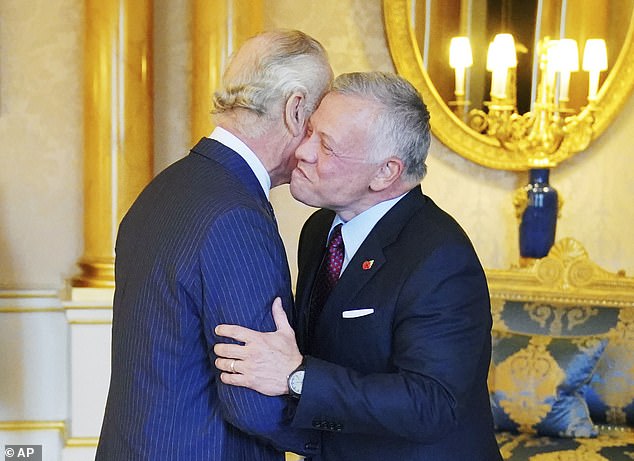 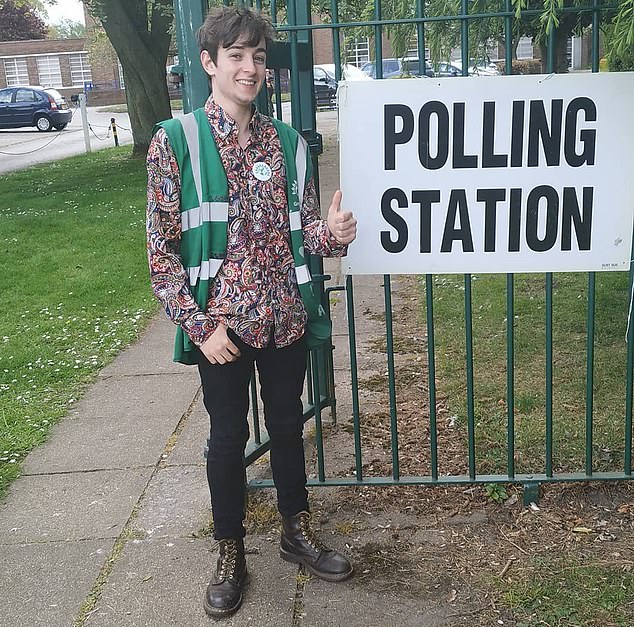 In an online biography, Thelwell boasts of his long involvement in left-wing politics, which began in 2015 when he campaigned to oust Tory MP Esther McVey from her Merseyside seat over her views on the advantages.

At Micklegate Bar in York on Wednesday, Thelwell was knocked to the ground by four police officers as he shouted “this country was built on the blood of slaves”. Meanwhile, onlookers shouted “God save the king” and “shame on you”.

Footage shows the flock of eggs passing in front of His Majesty and smashing on the ground beside him as he was greeted by city leaders. Charles looked around briefly to see the broken eggs, but otherwise barely reacted.

Thelwell took part in several student protests while studying for her bachelor’s and master’s degrees.

He staged a rent strike and squatted in two different locations in York, including a former music venue which he turned into a ‘radical library’. Riot police eventually expelled his group.

He told York Mix after the 2021 raid: “They kicked down my door. They kicked my head in. My girlfriend is crying her eyes out.”

North Yorkshire Police have confirmed a 23-year-old man has been arrested on suspicion of disturbing the public order.