Inflation is back and it seems to be here to stay. According to the latest figures released by the Department for Business, Energy and Industrial Strategy, year-over-year price increases for building materials reached 24.5% in March, well outpacing the 7 % economy-wide that the CPI recorded in the same month and adding even more grief to businesses. Although this meant a boom for material manufacturers, contractors were hit hard.

Lacking economies of scale and working with tight margins, contractors and specialists felt the pressure of spiraling costs even more strongly than their larger counterparts. Noble Francis, Economics Director of the Construction Products Association (CPA), says that because of their strong relationships with manufacturers and their priority as larger customers, large home builders and contractors can more easily plan and buy materials in advance and on a large scale, thus maintaining their inflation. bill down.

“Those who can’t do that are those who are small, specialized entrepreneurs,” he says. “They can’t plan and buy six to nine months in advance because they don’t know what the demand will be like.

“They do a project, collect the revenue, and then buy what they need for the next project. They work on smaller projects, shorter project pipelines. They know what they will be doing for the next three months, maybe the next six months at best.

Some suppliers would hold prices for less than 24 hours. This approach “effectively transfers that risk to the subcontractors,” according to Neil Harrison, director of pre-construction at Briggs Amasco roofing company, leaving companies the choice between negotiating a variable price with their main contractor and taking on the risk. themselves.

“There will be people, maybe even big potential contractors, who take that risk and get it wrong,” Harrison says.

The ability of companies to cope with this level of inflation depends largely on the cash they have available. Fortunately, many businesses have found themselves in a relatively strong cash position as a result of the pandemic, according to David Frize, general manager of the Building Engineering Services Association.

He says, “There’s a little more grease in the system than there used to be, but cash flow is becoming an issue because projects are being delayed, and we’re also starting to see projects being put on hold because the customer can’t see price certainty, so until we better understand where things are going, we’ll just wait and wait.

But subcontractors suffer disproportionately from these delays, which prevent them from generating revenue in the short term and prevent them in the medium term from starting their next project, subjecting them to further cost inflation due to the subsequent purchase of materials. According to CPA’s Francis, “the only way to minimize the effects of cost inflation is for all parties to share the blow”, but this is often easier said than done, with many clients and contractors fearful of s expose to risk.

“On the client side — prime contractors and such — I haven’t really seen any movement in terms of thinking about variable pricing or fluctuating price contracts,” Harrison says. “It’s difficult for a client but a variable contract is something that should be considered more.”

Gokhan Hassan, managing director of M&E consultancy GHCS, agrees that there is “no appetite for fluctuation clauses in contracts or cost plus” in the private sector, while noting that such arrangements are generally more achievable in public sector contracts.

Richard Wade, construction manager and partner at Blake Morgan, says clients come to the law firm looking for the most risk-free approach to contracts possible, despite a supply chain “pushing very hard” for price fluctuation provisions. “I think we’re still going to see problems, because you’re not going to see a change in attitude from customers in general,” he says.

Blake Morgan partner James Bessey says contractors “could help themselves a bit” by changing the way they quote their prices. He says subcontractors often offer a lump sum price to prime contractors, hoping that overstatements and understatements will turn into a profit.

“The problem with that is that it’s almost impossible to give any sort of escalation on the cost elements if you don’t have clarity on what they are,” he says.

Some companies have already learned that lesson, according to Rob Driscoll, legal and business director of the Electrical Contractors Association, who says these companies break down prices and require flexibility on certain items as a condition of accepting a job. . According to Driscoll, many subcontractors now tell customers: “OK, if we can’t index everything, we will identify the products and materials that we cannot guarantee, we will put that as a provisional sum based on today’s prices and then you pay us and we will buy the actual price. 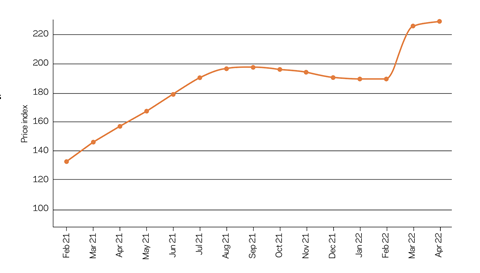 Cathal McMullan, managing director of Kane Group, says he has discussed varying prices for particular materials, but the lack of major inflationary issues in recent memory has left many without a proven approach to fall back on. “There is no familiar clause that no one has followed through, so the client is nervous and the main contractor is nervous. The best [arrangements]like everything, will run on trust and everyone will be honest about it,” he says.

Kane, a Northern Ireland-based MEP contractor, coped with inflationary pressures by pushing for an early design engagement, allowing the company to secure product in advance and at lower cost. McCullan says the company’s embrace of offsite manufacturing and digital construction has also delivered efficiencies to help it weather the storm.

“How can we have an impact on material cost inflation? We really can’t, but what we can have is our efficiency in using materials,” he says. “You can’t influence the electricity price, but you can turn off the lights around the house.”

There’s no two ways, really: either you decide to go for the wall, or you cut corners

Increased communication throughout the supply chain can also help ease lower inflationary pressures. Dean Averies, director of Beard Construction, says the company has started bringing suppliers together in senior management meetings at the start of each week.

He says this approach has allowed the company to work with suppliers to control and manage inflation risk, using the storage facilities available to companies in its supply chain to purchase products sooner. “Our way of dealing with inflation was to buy it and store it, and we’re finding there are ways to do that even with things like carpentry,” he says. He adds that Beard is having “adult conversations” with his employers about risk sharing, challenging the conventional approach of buying risk.

Tony Cornwell, director of commercial operations at Glencar, says his company has an agreement with an employer to share the risk on the price of specific materials, and adds that a collaborative approach with early commitments to suppliers is the best way. to meet the challenge of inflation.

“If we engage in our supply chain, they’re more than likely to get engagement from their suppliers and the people who work for them as well,” he says. “Where people have been caught off guard is when they sign an agreement and commit to something and then it slides for three or four months and then they have to sustain those three or four months of increases. So early engagement and meeting deadlines is how we try to push, to move forward.

Cornwell acknowledges this means losing a competitive advantage when they arrive on site, but says: “We prefer to ensure that we have certainty of cost and delivery to pass on to our customer, rather than trying to create a financial improvement.”

Go to the wall?

According to Hassan of GHCS, what contractors really need to do is increase profit margins, but he acknowledges that in a competitive market, that is not in their power. “If you’re a developer you can say, look, open your books, show us what you’ve scored, I want everyone to increase it by 5% – seems like a fantasy world to me, but who knows , ” he says.

The worry for Hassan is that without it, contractors will cut corners to stay afloat, reducing on-site management and stretching staff. “There’s really no two ways to do it: either you decide to go to the wall or you take shortcuts,” he says.

The concern in the industry is that without greater risk sharing, a wave of contractor insolvencies could be on the cards. According to the Insolvency Service, there were 419 insolvencies in the construction sector in March this year, an increase of 35.6% compared to the 309 recorded in April, and 172% more than in same month last year. 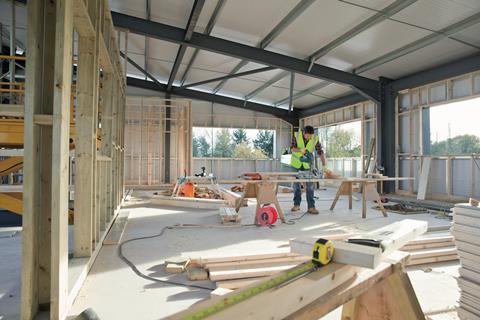 Despite this rise, many industry players remain optimistic at this time. According to insolvency practitioner John Bell, most of the insolvencies happening in the industry right now are “zombie companies” that have survived thanks to covid supports that recently ended.

Additionally, demand remains relatively strong, which CPA’s Francis says should continue to be the case, with strong work pipelines reported even from bankrupt companies.

“There’s always an element of optimism and positivity because the pipeline is still there,” says Lorraine Gregory, regional director of the Civil Engineering Contractors Association. ” I do not think so [firms] seeing it as ‘this is going to stop work’, necessarily, it just means things are going to take longer and they may have to be a bit more innovative in the way they do things”.

“The construction market defies logic at the moment,” says Harrison of Briggs Amasco.